This unusual leaf-eating animal spends most of its solitary life hanging upside down from the forest canopy.

It eats, sleep, breeds, and nurses its young in this position, but will sit in the fork of a tree but sometimes descends to the ground.

The underfur is dense, often matted, while the outer fur is finer and sleek. The hair flows back from the head and as the animal is almost constantly upside down, the body hair lies from belly to back so that the rain will runoff. Often the fur has a greenish tinge caused by microscopic plants that live on the hairs.

The sloth leaves the trees to defecate on the ground once a week in a carefully selected toilet site. It tries to avoid going down to the ground where there is a risk of predators such as jaguars and ocelots. The two-toed sloth is nocturnal, sleeping during the daytime and eating at night. They move very slowly at night, one limb at a time, but when sufficiently motivated they are capable of moving at about 1.6 km per hour.

Sloths are actually much better at swimming than walking, using their strong forefeet to propel themselves through the water, although they spend almost all of their time in the trees.

Mr. Jingles is 28 years old and lives here at Paradise, in the Rainforest with Dame Jingles, our female Sloth. Two-Toed Sloths spend their lives hanging from trees, eating, mating, and sleeping! In fact, Sloths sleep a lot – some 15 to 20 hours every day! He absolutely loves cuddles with his partner and eating sweetcorn!

Similar to Mr. Jingles, Dame Jingless spends most of her time sleeping in her favourite box! She’s also a massive fan of sweetcorn as well and loves cuddling up to her partner Mr. Jingles. 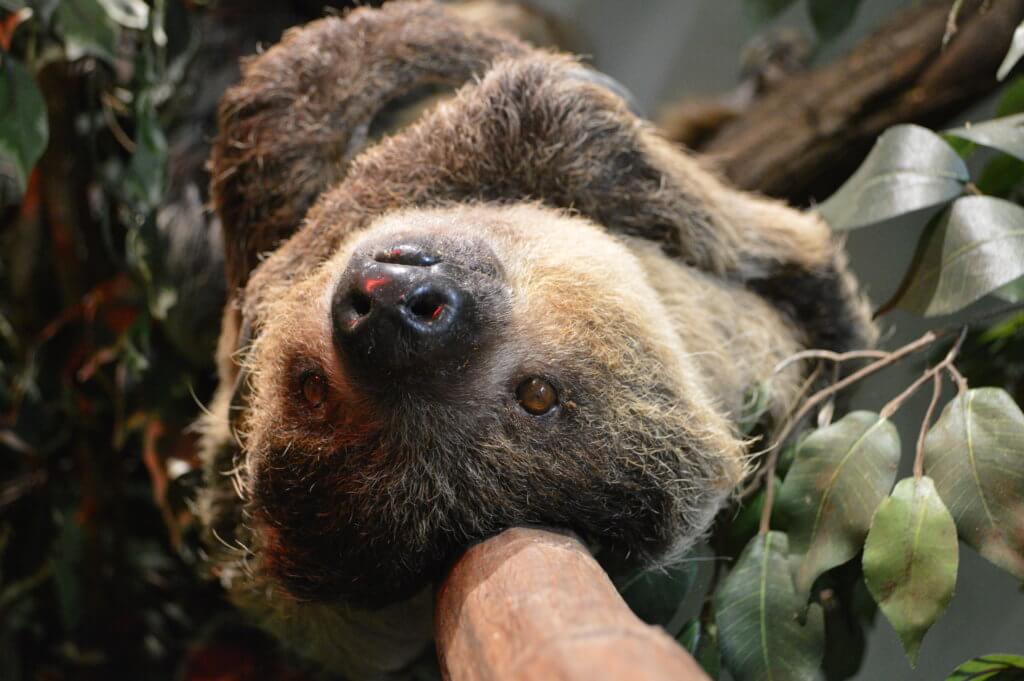 Family:
Megalonychidae
Diet:
Tree leaves, shoots and foliage
Life Span:
30+ years in captivity
Distribution:
South and Central America
Did you know?
Organs such as the heart, liver and spleen are placed differently in sloths than in other mammals to accommodate their upside-down lifestyle