A Guide to Lions (Everything You Need to Know!)

Everything you need to know about lions!

Paradise Wildlife Park is home to the White Lion, one of the most majestic animals on the planet! Find out more about Lions in our guide.

There are two species of Lions, African Lions and Asiatic Lions. Both species have golden fur across their bodies, with Asiatic lions sometimes having a darker colouration. African Adult male lions have a large full mane with bushy hair that covers their head and neck and goes under all the way to their belly. Their mane can range in colour from light to reddish brown. Asiatic Lions tend to have a short and thinner mane so their ears are always visible. The most noticeable physical characteristic found in all Asian lions is a longitudinal fold of skin running along their belly. Both African and Asiatic Male lions are larger than female lions. Lion cubs are born with light spots on their fur to help them hide when they are young, these spots fade as they grow up.

How big are Lions?

Lions are able to make a loud deep roaring noise and can also purr like a house cat.

How strong are Lions?

What do Lions eat?

African Lions hunt and eat medium-sized hoof stock animals such as zebras, antelopes and wildebeests. Sometimes they can even be known to hunt elephants. Asiatic Lions eat prey smaller than their counterparts such as deer, wild boar and antelope.

What is a female Lion called?

A female Lion is called a Lioness. 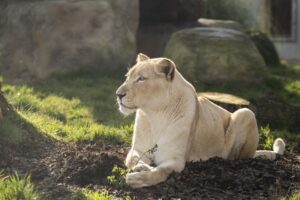 Where do Lions live?

African Lions live in the continent of Africa and can be found in the sub-Sahara, three of the five largest populations can be located in Tanzania. Asiatic Lions are found in the Gir Forest India.

How long can a Lion live in the wild and in captivity?

Lions are known to live for an average of 15 years in the wild. In captivity Lions approximately live up to around 20 years old.

Is a Lion stronger than a Tiger?

It is believed that a Tiger is stronger than a Lion in terms of physical strength. A Tiger is generally physically larger with muscle than a Lion.

Do Lions have predators?

Both African and Asiatic Lions have no real predators except for humans who hunt them and encroach on their habitats.. A very young or ill African Lion may become prey for hyenas if left alone.

Where can you see a Lion in the UK?

You can visit our Pride of White Lions here at Paradise Wildlife Park. Get even closer to the pride of Lions by meeting them in a Big Cat Experience, where you can hand feed one of our lions and learn loads of fun and interesting facts about them.

How can you adopt a Lion?

You can help support Lions in the wild by adopting one of our White Lions here at Paradise Wildlife Park. Adopt today! 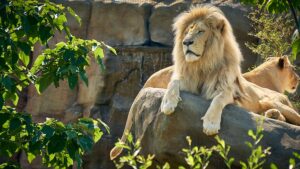