Paradise Wildlife Park is excited to announce the birth of not one but two Pygmy Marmoset babies and they couldn’t be any sweeter.

On the morning of 24th July, keepers after monitoring the troop arrived to find two new additions to the Pygmy marmoset family, with both twins weighing around 14g at birth. Pygmy marmosets are the smallest known monkey in the world, with adults weighing a mere 100 grams when fully grown.

The birth of the twins has extended the beautiful group to a troop of six, with all members of the family on board to help with raising them. Our breeding pair Nippet and Bella have been doing exceptionally well since welcoming their newest additions and have even received help from their oldest children Mimo and Bombeiro, who have been seen carrying the twins from branch to branch.

The babies have grown in confidence over the last couple of months and have begun bouncing around the habitat with their older brother and sister. The troop are very mischievous and love to jump onto their keepers when they are being provided with their food and enrichment. The twins now weigh around 35g and are definitely growing up fast.

These beautiful new additions to the troop, need names and Paradise Wildlife Park will be launching a naming competition next week for you to help decide the names of the twins.

Pygmy marmosets are listed as ‘least concern on the IUCN (International Union for Conservation and Nature) Red List. However, their wild population is decreasing due to deforestation and the illegal pet trade. Breeding successes like this one at Paradise greatly supports the international breeding programmes and aids the protection of the species.

Paradise Wildlife Park is fully committed to the conservation of wildlife globally and supports numerous projects around the world, in the aid of the welfare of animals.

Visit the newest additions to Paradise Wildlife Park in the Rainforest Building, where they are joined by Two-Toed Sloths and various other small mammals. 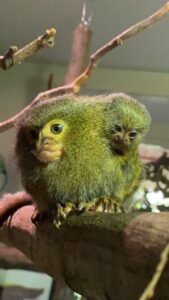 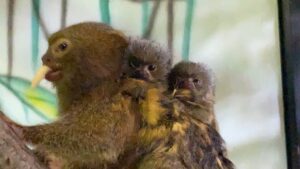