Bears About The House

Bears About the House Hits BBC Two this July

When can you watch Bears About the House?

What is the show about?

The Director of Conservation and Big Cats at our sister site The Big Cat Sanctuary, Giles Clark travels to Laos, south east Asia, to embark on his latest and fluffiest conservation mission. Giles, alongside the help from CEO of Free the Bears, Matt Hunt work together to build up the sanctuary and also help rear five month old sun bear, Mary.

Mary was rescued by Free the Bears after her mother was killed in the wild and was spotted on the back of a truck to be sold into the illegal wildlife trade. She now lives with Giles and Matt but needs round the clock care. Mary was found very malnourished and fragile, and desperately needed the care from the sanctuary. 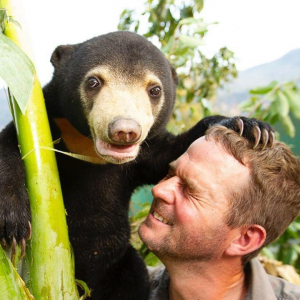 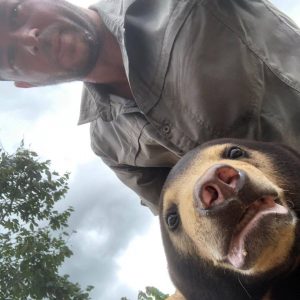 The sad situation is that, across Asia, sun bears are sold into the illegal wildlife trade as trophy pets, used for traditional Asian medicine and restaurants. Over 10,000 bears are kept in cages in bear farms so that their desired body parts can be extracted for the highest bidder. Giles and Free the Bears are committed to ending this cruelty within the illegal wildlife trade and are working with the government to end these bear farms.

Join Giles on BBC Two at 8pm on the 15th of July for the first episode of this amazing series. Watch Mary achieve incredible life milestones and see how grow into the adorable and mischievous bear cub she is today.

Visit our sister site The Big Cat Sanctuary’s website here, to purchase a cute cuddly Sun Bear toy. Where 15% of profits will go to Free the Bears.

Who is Giles Clark?

What else can you see Giles Clark in?

Giles also starred in ‘Big Cats About the House’, a show that followed his life after he took Maya, a vulnerable Jaguar cub, in to his home. This three part series and can be found on Youtube and occasionally on BBC iPlayer.