Congratulations to our sister Charity The Big Cat Sanctuary!

We are excited to announce that our sister charity The Big Cat Sanctuary has welcomed the birth of a rare Snow Leopard cub.

On 15th September 2021, the sanctuary’s CCTV cameras captured the incredible moment of their resident snow leopard, Laila, giving birth to a beautiful and healthy male cub.

So far, the little cub has been developing brilliantly and can be seen cuddling up with his experienced mum, Laila. Currently, weighing in at 1.8kg and getting bigger each day from Laila’s milk, he appears to be getting all the care and attention he needs from loving mum. The little cub will stay inside his den with Laila for around two months as he grows stronger and will take his first steps outside after being fully vaccinated.

The keepers and staff at The Big Cat Sanctuary are referring to the newest addition, as “Little Cub”, as they will be giving you the opportunity to name the snow leopard cub through hosting a naming competition while raising vital funds for the Sanctuary and our conservation partner, the Snow Leopard Trust.

Laila and Yarko are a breeding pair, and this is their second time siring cubs. They became parents in 2019 and gave birth to two boys, Koshi and Khumbu. Koshi has moved to Highland Wildlife Park to start a family there, and Khumbu will be moving to Twycross Zoo in the coming months to play his part in the Snow leopard breeding programme as well. For the time being, Yarko is separated from Laila and Little Cub, but the sanctuary hopes to reintroduce them as a family unit further down the line.

The Sanctuary is part of the European Endangered Species Breeding Programme to help create a safety net for endangered species in the wild. Snow leopards are an endangered species and are classed as Vulnerable on the IUCN Red List, with around 4,000-6,000 left remaining in the wild. They are highly threatened in the wild due to poaching for their fur and the traditional medicine trade. The breeding programme will help boost the captive population of Snow leopards which gives hope to this vulnerable species if they ever go extinct or critically endangered in the wild.

Second-time mum, Laila, has taken the role of motherhood in her stride, and the whole team at Paradise Wildlife Park and The Big Cat Sanctuary are so proud of her. She is very caring, attentive, and protective over her cub and shows all the signs of being the perfect mother.

The arrival of the Snow Leopard cub is just one of the many stories being covered in a brand-new series of ONE ZOO THREE for CBBC. Currently, in production, the show features brothers Cam, Tyler and Aaron Whitnall as they share their passion for animals and conservation with younger viewers. Shot over a period of 12 months, each episode follows the daily adventures of the brothers and is packed full of animal facts, information, and entertaining content for the whole family. Scheduled for transmission in 2022, the show is produced by Bristol-based independent production company True To Nature Ltd for CBBC in the UK and is available for international distribution through Sky Studios/NBCUniversal. 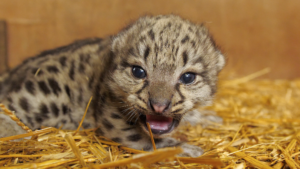 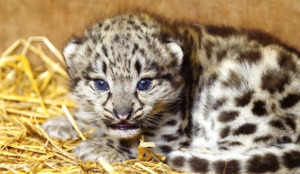