Staff members from Paradise Wildlife and The Big Cat Sanctuary are travelling to South East India to help support the conservation efforts of the Fishing Cat Conservancy Trust (FCCT).

The aim of this trip is to fund and have an active role in making the natural environment more sustainable for the endangered fishing cat, helping to maintain their population in the wild and provide alternative, sustainable livelihoods for the people living in the same habitats. The challenge team will also undertake research on the ground which will greatly improve our understanding of the fishing cats’ natural behaviours and in turn, will drive the knowledge that could prevent these amazing cats from becoming critically endangered, or even extinct.

The trip will take place between the 28th of January 2020 to 12th February 2020 and will be headed by Ashwin Naidu (the founder of FCCT) and his team who will take the challenge team members across South Indian Coast to fishing cat habitats. 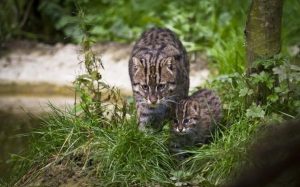 Fishing cats are native to wetlands, rivers, and mangrove forests in South and Southeast Asia. They prey primarily on fish and crustaceans. Like many other rare species, not much is known about fishing cats in the wild.

They are threatened by habitat destruction, poaching, and a lack of awareness throughout much of their range. Mangroves, which are prime habitat for fishing cats, provide local people with nurseries for fish and protect entire communities from storm surges. Therefore, with deforestation reducing the fishing cats’ habitat, it is crucial for charities such as FCCT to rebuild the damaged areas. They are not just helping an endangered wildlife species but also enhancing protective barriers for local people.

This project aims to promote the long-term survival of fishing cats in the wild through re-wilding areas with mangrove, public education, capacity building, and community-based research and conservation.

For every £100 raised for FCCT 100 acres of Mangrove can be protected/ restored. 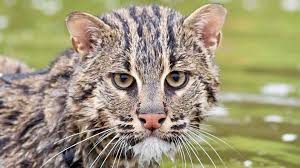 Mangrove are natural wave breakers that protect both wildlife and humans from soil erosion and natural disasters like tsunamis. They sequester up to five times more carbon than tropical forests and help mitigate negative impacts of climate change.​ Mangrove provide vital habitat for wildlife and fish, including many endangered species

An estimated 50-80% of the historical coastal mangrove cover over South and South East Asia has been lost due to human demands. Protecting the remaining and restoring the lost mangrove areas is vital for the animal and human communities they support and protect.