The 1st of January marks a very special day for Paradise Wildlife Park as we come together to celebrate Newt our Northern White-Cheeked Gibbon’s very special birthday as she turns an incredible 49 years old!

Newt arrived at Paradise Wildlife Park in 2009 from a sanctuary. She was originally wild-caught and little is known about her background. Newt bears a few scars from her past such as missing digits on her hands and feet which gives us an understanding that her past was not one that was kind to her. Newt acts as an ambassador for the education of the plight of Gibbons being taken from the wild for the illegal pet trade and use in traditional medicines and foods.

Newt is the oldest animal in the primate section here at Paradise and is one of the oldest animals in the entire zoo. Newt is the oldest white cheek gibbon in the European breeding programme and could possibly be one of the oldest in Europe as private collections are unknown. She can often be seen grooming and taking care of Ripley and Ethan, with whom she shares a home. Even though she is an old lady, she can often be seen hanging upside down and swinging around her habitat. She is well known by her keepers for being very nosey. Newts absolute favourite food is corn on the cob and little gem lettuce and will always grab one on each foot and one in her hand! 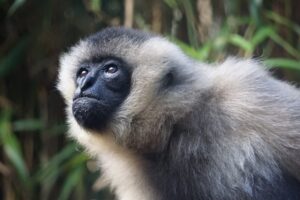 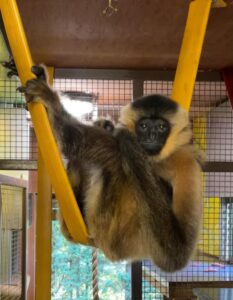 Paradise partners closely with the Association Anoulak donating annually to their efforts in protecting the species of gibbons. With gibbons possessing exceptionally long arms, which are used to swing through the treetops at high and efficient speeds they can cover more than ten feet in a single swing between branches. They are not the easiest animals to protect as they frequently cross areas of large distances in short periods. However, with efforts such as the Association Anoulak, we hope this species can thrive once more in their natural habitat. Newt is an incredible individual and her sweet nature and nosey behaviour continues to steal the hearts of the keepers.