We hope you enjoyed the spooktacular season!

The spooky season and autumnal theming has been fan favourite once again. With many of the residents here at Paradise Wildlife Park getting into the spirit themselves as they are treated to some Hallo-tastic pumpkins!

Paradise Wildlife Park, teamed up with Cammas Hall Farm on the border of Hertfordshire and Essex to provide the big cats of Paradise with a festive snack. Both the Pride of Lions and Snow Leopards got the chance to take on and sink their teeth into larger than life pumpkins. The pumpkins naturally grown by Cammas Hall Farm, arrived at Paradise Wildlife Park, causing quite a large amount of excitement amongst animals and keepers. With the two large pumpkins weighing over 30kg each, they were definitely going to test the strength of some of the big cats! 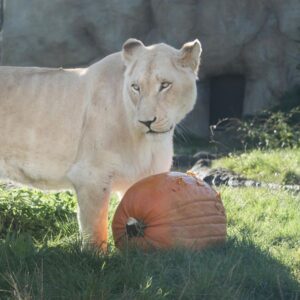 One of the keepers from Paradise stated that: ‘this is a fantastic source of enrichment for the animals, allowing them to exhibit natural behaviours whilst enjoying the spooky season.’ The Pride of Lions went first taking on a giant orange gourd with Zuri the youngest of the pride pursuing the large pumpkin and picking up the whole gourd in her mouth! Exhibiting her strength and power to the keepers and the rest of the pride.

Up next was the infamous snow leopard couple Panja and Jessie who took on a giant ghost-white pumpkin. Jessie as usual took the lead, stalking up to the gourd whilst Panja watched from a distance at the new addition to their habitat. The pumpkin became a huge hit with the snow leopards, who took a different approach than their lion counterparts. Jessie could be seen snuggling up to the gourd and having the zoomies around the pumpkin. Even though Jessie and Panja attempted to break the gourd it prevailed them. 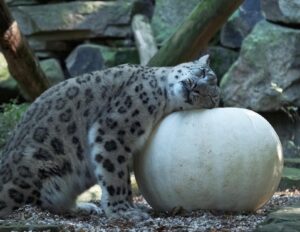 Both big cats enjoyed their ghoulish enrichment and were seen throughout the day continuously enjoying themselves with their spooky addition to their habitats. Both giant pumpkins put up a fight against the big paws but it definitely looked like the big cats had the overall win. A wide variety of other animals around the park have gotten into the spooky season festivities from meerkats to lemurs being seen enjoying the pumpkin treats through an action cam and even one of the park’s tarantula got into the spooky season by taking a walk along with the pumpkins. 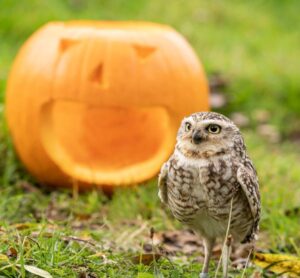 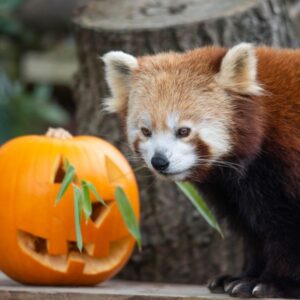 We hope you all had a spooktacular season and we look forward to seeing you all again soon!