Golden Lion Tamarin Day marks an important date in the zoological calendar across the globe. This is due to the fact that Golden Lion Tamarins are a Zoo success story from them being brought back from the edge of extinction through coordinated breeding programs in zoos across the world.

The golden lion tamarin is one of the most threatened primates in the world. Endemic to the lowland Atlantic Forest of Brazil which stands as one of the most threatened and biologically diverse areas on the planet. Golden lion tamarins are considered to be an umbrella species for a wide range of species that co-exist within the same habitat. They are primarily identifiable by their reddish-gold fur and characteristic lion-like mane. Their long tails help them balance as they leap between the forest landscape. Here at Paradise Wildlife Park, Ron and George act as ambassadors for their species, helping to raise awareness and understanding for their wild counterparts. You can visit Ron and George in our Rainforest Building and get to see their inquisitive and mischievous behaviour.

Our Head Keeper of Primates and Small Mammals Kim talked to us about Golden Lion Tamarins saying:

‘working with a species as special as the golden lion tamarin every day is such a privilege. We are lucky enough to have two males with fantastic personalities. Ron and George are always keeping their keepers on their toes! They love to interact with enrichment, do brilliantly with their training and they help people to learn and fall in love with the species each and every day.’

From continuous deforestation and human interference within their natural habitat, golden lion tamarins were on the brink of extinction in the 1960s, with the wild population estimated at fewer than 200 individuals. In 1973, 43 zoos and breeding facilities stepped in to help save these critically endangered animals through a comprehensive breeding program, which resulted in the reintroduction of 146 golden lion tamarins born within zoos back into their native habitat in Brazil between 1984 and 2000. Today 52% of the wild population are descended from those reintroduced individuals. This conservation support from zoos across the world gave the wild population a positive step for their protection. The International Union for Conservation of Nature (IUCN) saw that in 2003 golden lion tamarins could be re-listed as endangered from critically endangered on their Red List which monitors populations of animals and plant life globally. Whilst efforts are still needed to save this species there is hope that this species can be conserved through the incredible efforts by zoos working together across the world to actively protect and conserve a species. 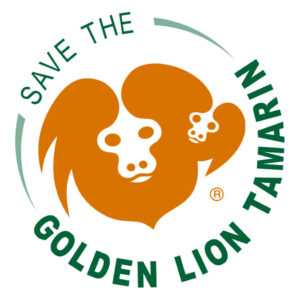