During the third Saturday of September each year, Red Pandas take centre stage to raise awareness for their declining numbers and the need for support in the aid to help save the species. Within 20 years our planet has seen the loss of half of its wild red pandas, from the decline of habitats due to human interference and deforestation. International Red Panda Day hopes to encourage people to learn about these beautiful creatures and save the biome in which they live.

Here at Paradise Wildlife Park, Nam Pang and Tilly act as ambassadors for their wild counterparts, helping to educate the public through their daily activities and keeper talks. Our beautiful couple, play an important part in the survival of the species as a breeding pair as part of the European breeding program. Tilly has successfully reared two sets of twins here at the Park, which has had a positive impact on the survival of the genetics of the species.

Red Pandas live in mountain forests of the Himalayas, at high altitudes due to their arboreal nature with plenty of bamboo. Their diet consists of almost solely bamboo and can eat around 20,000 bamboo leaves a day. Red pandas were discovered in 1825, 48 years prior to the more familiar known black and white pandas. Even though they are not related, they both hold the name of panda; a mispronunciation of the Nepalese word ‘Ponya’, which means ‘eater of bamboo’. However, due to the exploitation of forest resources and fragmentation, accessibility to bamboo and trees for arboreal living is becoming increasingly more scarce.

Our conservation partner Red Panda Network has become a world leader in efforts to protect red pandas and their habitat. The year 2010 saw the launch of International Red Panda Day and has since grown to become a day participated by a wide variety of zoos in red panda activities to help raise awareness for this endangered species.

You can come and see our beautiful Nam Pang and Tilly here at the Park near our newest habitat The Land of The Tigers. Don’t forget to take a listen in on one of our Red Panda talks held each day at 2 pm! 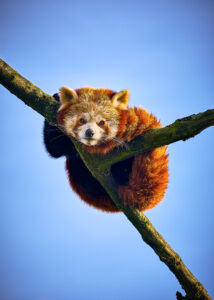