The children’s series will air on CBBC and BBC iPlayer

A new TV series coming to you on 28th September called “One Zoo Three” features the team at Paradise Wildlife Park. The children’s series will air on CBBC and BBC iPlayer at 4:20pm on Monday 28th September following the extraordinary and hilarious lives of Tyler, Cam and Aaron as they live and work at their family zoo. 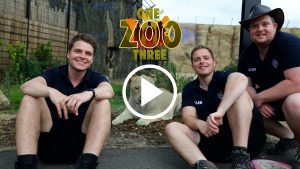 What is One Zoo Three about?

Having grown up with many of the 800 exotic animals that share their home, the brothers have a very special connection with these rare and endangered residents.

Paradise Wildlife Park is a family run zoo with three brothers: Aaron, Tyler and Cam all growing up and living on site. The TV show will be following the daily tasks these zoo brothers take on, from playing with bacon bubbles to cleaning out the tapir toilet – poo-wee!

As well as the daily fun that comes with living on a zoo, you will be able to meet the fabulously furry faces of our 800 plus animal residents. Full of character and quirks, ‘One Zoo Three’ will be the perfect after-school, before school or weekend viewing.

What can you expect from One Zoo Three the upcoming TV show?

Director of Paradise Wildlife Park and star of ‘One Zoo Three’, Tyler Whitnall says: “We hope our supporters and the UK public love our show One Zoo Three! It’s an amazing programme that will hopefully showcase the very best of what working at a zoo is all about. I feel very privileged to grow up on site at Paradise Wildlife Park alongside my two brothers and cannot wait to share our message of animal welfare to the nation”

While providing fun, light hearted entertainment for all children, we hope that it raises awareness for our wonderful park and conservation. Every time someone comes to Paradise Wildlife Park, they are supporting our charity through tickets sales and any on site purchases they make. In turn, those funds will be then used to upkeep the park and to help support all the wildlife charities we partner with across the world.

Secondly, we hope that ‘One Zoo Three’ sheds a more positive light on zoos and wildlife parks. The industry as a whole has experienced much controversary in regards to the welfare of zoo animals. However, the modernisation of zoos have brought about new levels of animal welfare and husbandry that was hardly considered in the past. We hope that One Zoo Three shows all the good zoos do for animals and how they are paramount for conserving our planet’s species.

Where can you watch One Zoo Three?

Make sure to tune in each night the week commencing 28th September from 4:20pm on CBBC over and check out our social media and website for more frequent ‘One Zoo Three’ updates!