As their name would suggest, you would think that Red Pandas and Giant Pandas are long distance cousins. However, their relationship is an unusual one, as yes, there are many similarities in terms of diet and appearance, but there are also significant differences between the two iconic creatures.

In their very genus there are striking differences. Even though they are both called ‘pandas’ they belong to different family groups. Giant Pandas belong to the Urisdae or ‘bear’ family, whereas red pandas belong to the Ailuridae family. The Ailuridae family is taxonomically unique because it is monotopic – there is only one animal consisting of the species. Research has found that despite the two animals belong to different families today, they have a common ancient ancestor.

However, just to make things complicated, scientists Wilson and Reeder found that there are two distinct species of Red Pandas. These species are the Himalayan Red Panda and Chinese Red Panda. Both regions are shown to produce Red Pandas that differ in morphology and biogeography. 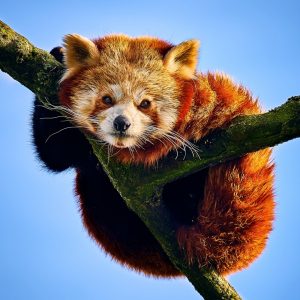 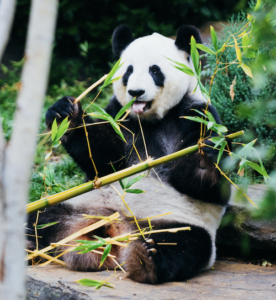 Despite Red Pandas being known as a ‘lesser’ panda, they are in fact the original panda. French zoologist Frédéric Cuvier first described the western Red Panda Ailurus fulgens in 1825, 48 years before the black-and-white bear was catalogued. As Giant Pandas dwarf Red Pandas, we can suspect that Red Pandas are known as ‘lesser’ purely due to their small size.

The name “panda” is believed to be derived from the Nepalese words: “nigalya ponya” meaning “bamboo eater.” Bamboo is a huge part of both Giant Pandas’ and Red Pandas’ diets. However, Giant Pandas eat up to 20kg of bamboo a day, while Red Pandas only eat 2-3kg of bamboo a day, along with fruit and insects. Both the Red Panda and the Giant Panda have an enlarged wrist bone, engineered to hold bamboo stems while they eat! This is also described as a “false thumb.”

Sadly, both animals are threatened by human impacts on their natural environments. Deforestation is the major threat to these species, as well as being poached for the illegal wildlife trade. As a result, Red Pandas are classified as ‘Endangered’ and Giant Pandas as ‘Vulnerable’ by the IUCN Red List. Paradise Wildlife Park’s Red Pandas Nam Pang and Tilly are excellent ambassadors for their wild counterparts. We hope that by visiting Nam Pang and Tilly, adopting them, or having an animal experience with them, we can help educate the wider general public about the threats wild Red Pandas face. 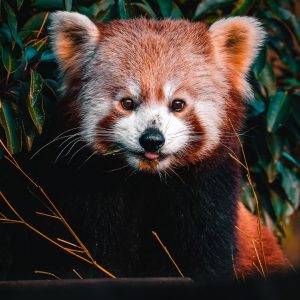 One way of saving the species is by keeping a healthy and genetically diverse population of captive Red Pandas and Giant Pandas. The international breeding programme is the governing body that ensures the safe and sustainable breeding of animals for conservation purposes. Nam Pang and Tilly are part of the breeding programme, and we hope that one day they will have cubs. In general, zoos would say that Red Pandas breed very successfully whilst in captivity. However, Giant Pandas are a bit trickier. Female Giant Pandas only ovulate once a year, which means they only have 2-3 days available for conception. This makes the breeding of Giant Pandas significantly more difficult, whether this is in the wild or in captivity.

We hope that you visit our beautiful Red Pandas here at Paradise Wildlife Park! Make sure to book your tickets in advance as to not miss out. We cannot wait to welcome you.