A relative of the rhino, the Brazilian tapir, or lowland tapir, is one of four species of tapir. All four tapir species are classified on the International Union for Conservation of Nature (IUCN) Red List as endangered or threatened, largely due to human interference through hunting and habitat loss. 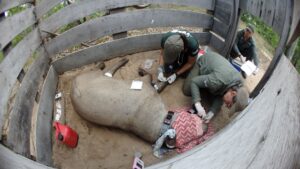 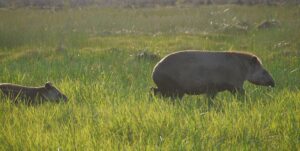 Here at Paradise Wildlife Park, our two tapirs Temuko and Tamara act as ambassadors for their wild counterparts and help educate visitors on their species. Tapirs themselves have fairly small eyes, therefore, holding poor vision but have an acute sense of smell and hearing to make up for this. Tapirs are known for communicating in a number of ways. A high-pitched whistle is one of the most common tapir vocalizations. Tapirs also have various ways to defend themselves from predators such as Jaguars. Their thick, coarse neck mane helps protect against a neck bite, and foot-stamping exhibits a sign of behaviour where tapirs are getting ready to defend themselves.

Our Head Keeper here at Paradise Wildlife Park James Cork has worked with our Tapirs for over 15 years and getting the options to go out to Brazil and to the Pantanal to see wild Tapirs was a dream of his. This lifelong dream for our head keeper James, for helping and aiding the conservation of Tapirs in the wild would come true when he went out to Brazil to work alongside Patricia Medici who’s the leading tapir conservationist and her team studying the tapir population of the area. Through radio-collaring Tapirs, photographing Tapirs for future identify, taking biopsies/bloods and carrying out lab work, assessing camera trap footage and recording our findings. James recalled that: “It was great to see the work that’s happening in the field to help to try and save these amazing creatures.”

Through the vital work of protecting their environments and collaring wild Tapirs to help learn more about their numbers and movements, we hope that tapirs will be species that are still around for generations to come. 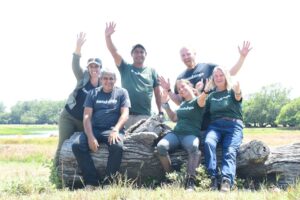 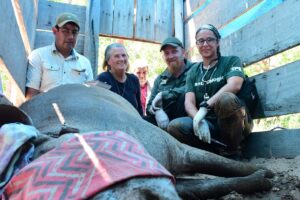