Chhouk is the baby elephant whose story made medical history, formed global alliances and tugged at the heartstrings of a nation. Paradise Wildlife Park has given continuous support to the Wildlife Rescue Alliance (WRA) who rescued and rehabilitated Chhouk, while also having an longstanding friendship with Nick Marx. Nick was previously one of the big cat keepers at Port Lympne Wildlife Park and has become the forefront of Cambodian animal protection. The funds donated from Paradise Wildlife Park & Zoological Society of Hertfordshire has contributed into the welfare of the baby elephant and here is his story.

Ten years ago, Chhouk, the injured orphan calf was rescued from the Srepok Wilderness Area in Mondulkiri. Chhouk, meaning Lotus in Cambodian, was found wandering about the Mondulkiri forest until he came across one of the WWF patrol elephants. Happy to finally see one of his own kind again, Chhouk followed the patrol elephant to the WWF patrol station. Upon discovering this small elephant, the team were deeply saddened at his condition. Chhouk was incredibly thin with a badly injured leg from being caught in a poaching snare. The Wildlife Rescue Alliance team were deeply concerned about the state of Chhouk’s health so decided to sedate him so that they could safely transport him back to Phnom Tamao, where the Phnom Tamao Wildlife Rescue Centre (PTWR) could treat him.

The journey was a tense one that lasted 26 hours, with poor Chhouk in a lot of pain. On 10th of March 2007 Chhouk was finally treated. He had lost the bottom of his leg to a snare and the constriction cutting off the blood supply, meaning that any flesh below was killed. Donations from organisations such as Paradise Wildlife Park allowed for the PTWRC team to sedate Chhouk every time the wound was cleaned and treated. This included small fragments of bone and damaged tissue to be removed.

Mr Tham, a general keeper at PTWRC was assigned the special care of Chhouk. Despite Tham’s reported “loutish” behaviour towards other members of the team, he became a devoted carer for the wounded baby elephant. Tham slept by Chhouk’s side every night and was diligent to the baby’s every need. With plenty of love and care, Chhouk’s wounded leg slowly but surely began to heal. His skin began to grow around the wounded area until it healed to a full stump.

Although Chhouk’s leg was technically healed, his lease of life was still under question. His mobility was a struggle and it became clear he still needed extra support. This is when PTWRC decided to begin contacting prosthetic medical companies who would be able to design a prosthetic stump to help Chhouk. Cathy McConnell of the Cambodian School of Prosthetics and Orthotics (CSPO) offered to help with this amazing project. After many x-rays and castings, the prosthetic was made and Chhouk took to it immediately! He shot off into the forest like he had “worn it all his life”. He was no longer able to keep up with the heard and all behavioural signs were suggesting he was once again a happy little elephant! CSPO has been a huge support by not only creating the prosthetic but have pledged to fix repairs and make adjustments when Chhouk grows bigger. 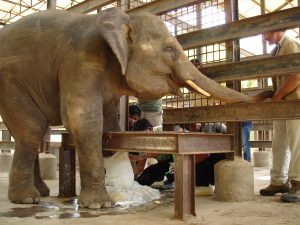 Chhouk’s story with PTWRC touched the hearts of the world and shows how valuable donations from organisations are in the protection and saving of these precious animals. In December 2019, Paradise Wildlife Park & the Zoological Society of Hertfordshire donated funds to WRA. The thank-you note back from Nick Marx confirmed the donation would be used to purchase Chhouk’s new larger prosthetic boot. Paradise is so honoured by this fantastic news; what an inspiration!

Paradise will continue the support of the WRA to ensure they continue their ingenious and incredible animal welfare work. All the best to Chhouk and we hope he has a happy and healthy life going forward.

Wolf Weekend Returns!
Wolf Weekend returns this October! Join us on the weekend of the 23rd and 24th of October for this howl-tastic...
Halloween at Paradise
Halloween is hitting Paradise Wildlife Park bigger and better than ever! Complete with the incredible after hours event, Dinos After...
Dino’s After Dark
Dinos After Dark  The really popular Dinos After Dark is back again this year for another exclusive after hours event...
Christmas at Paradise
We are giving our visitors something to look forward to this Christmas! Entry to Santa’s Grotto is included with...
Celebration of Speedway
Join us at Paradise Wildlife Park – the home of the National Speedway Museum on Sunday 20th February 2022 We...
Paradise Lagoon Closed for Winter Months
Please note that our Splash Zone: Paradise Lagoon is now closed for the Winter months.   We hope you enjoyed...
Wolf Weekend Arrives!
We are excited to announce the return of our annual Wolf Weekend this October. Join us on the weekend of...
Undercover Play Area Refurbishment
Please be aware that the undercover play area near the entrance to our World of Animals will be closed the...
Sun Bear Heights and Jaguar Jungle Update
As we see Summer of 2021 come to a close, we look towards the exciting times to come. We wish...
PALM OIL
PALM OIL POSITION STATEMENT Paradise Wildlife Park is committed to supporting a shift in demand from unsustainable to certified sustainable...