Paradise Wildlife Park is excited to announce the latest addition to our family, the West African Dwarf Crocodile!

The West African dwarf crocodile is one of the world’s smallest species of crocodile, growing up to 1.8 metres in length which by contrast, the Nile crocodile can reach over five metres in length. The West African Dwarf Crocodile can be found throughout western and central Africa and is currently listed as vulnerable on the IUCN Red List. This classification is due to the increasing habitat loss being experienced through amplified logging and poaching within the areas populated by this species.

They create their burrow habitats within the mangrove swamps, rainforests and slow-moving rivers and are mostly active at night. Like all crocodiles, the dwarf crocodile utilises special glands in their tongues to remove excess salt, allowing them to live within saltwater habitats. They are solitary night hunters, primarily feeding on fish and shellfish and occasionally taking on smaller terrestrial prey situated near the banks of the water.

Our West African dwarf crocodile Cletus, born in September 2012, joined us on the 17th of August from London Sea Life Aquarium and our zookeepers are happy to say he is settling into his new home comfortably.

Make sure you book your tickets to come and visit Cletus the fantastic West African Dwarf Crocodile in our Temple of Angkor here at Paradise Wildlife Park! 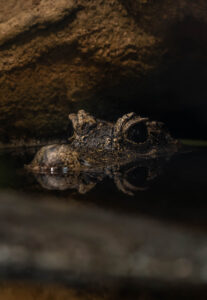 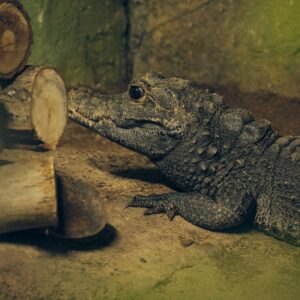 Photography Competition
Paradise Wildlife Park’s photography competition is back and aims to showcase some of the incredible photographic talent and beautiful wildlife...
Halloween at Paradise
Halloween is hitting Paradise Wildlife Park bigger and better than ever! Complete with the incredible after hours event, Dinos After...
Dino’s After Dark
Dinos After Dark  The really popular Dinos After Dark is back again this year for another exclusive after hours event...
Christmas at Paradise
We are giving our visitors something to look forward to this Christmas! Entry to Santa’s Grotto is included with...
Junction 25 Roundabout Closure 24th – 27th September 2021
Please be mindful that it is reported that from 9 pm on Friday the 24th to 5 am Monday the...
Name our Pygmy Marmoset Twins!
Last week saw the exciting announcement of the birth of not one but two Pygmy Marmoset babies. These newest additions...
International Red Panda Day!
It’s International Red Panda Day!   During the third Saturday of September each year, Red Pandas take centre stage to...
Baby Alert!
Paradise Wildlife Park is excited to announce the birth of not one but two Pygmy Marmoset babies and they couldn’t...
Goodbye Billy the Ocelot
It comes with great sadness that Paradise Wildlife Park must announce the passing of Billy the Ocelot.    Over the...