Drive 4 Wildlife completes the second phase of the East African conservation trip with the personal delivery of the animal ambulance. Brothers Aaron, Tyler and Cameron Whitnall, accompanied with their life long friend Redmond Boulton raised over £50,000 to make their dream of African wildlife conservation into a reality. 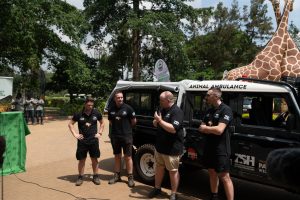 In February 2019, they drove 4,500km in just 4 weeks across Kenya, Tanzania, Rwanda and Uganda to support wildlife charities and organisations with their conservation efforts. The first expedition was supported by UK wildlife charities, including Paradise Wildlife Park, Zoological Society of Hertfordshire and The Big Cat Sanctuary. Along with Motorvision who part funded the project. Without their great support, the Drive 4 Wildlife mission would not be possible. Following the initial expedition, the boys realised how crucial the work these organisations are doing to protect and save their country’s wildlife. Ugandan Wildlife Education and Conservation Centre (UWEC) resonated particularly with the boys as they got to see the conflict between local communities and wildlife firsthand and wanted to help resolve this. Since then the team have been fundraising with the support of Paradise Wildlife Park and the Big Cat Sanctuary to send an animal ambulance to Uganda.

Over 100 people were present to receive the first ever animal ambulance in Uganda for UWEC, including national press and government members. Fantastically donated by Drive 4 Wildlife, with the support of Paradise Wildlife Park, Zoological Society of Hertfordshire and The Big Cat Sanctuary, this vehicle will significantly impact the rescue of more animals that have been captured for the illegal wildlife trade. Executive Director of UWEC James Musinguzi accepted the keys to the vehicle in a grand reception to a great round of applause from the audience made up of dutiful UWEC staff. UWEC is a truly vital wildlife conservation charity, it is responsible for the rescue of over 900 animals and accommodates a 24-hour animal rescue hotline. 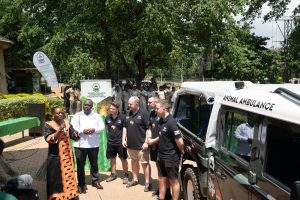 On average UWEC has rescued up to six chimpanzees from the illegal wildlife trade per year. Not only this but the vehicle should also aid in human and wildlife conflict. Whilst visiting UWEC, the Drive 4 Wildlife team will experience first-hand the valuable work the vehicle will be put to use out in the field. On their travels, the Drive 4 Wildlife team will assist UWEC in the relocation of a baboon family. Currently, the baboons are living amongst a human community where conflict between human and animal has become an issue. The baboons are stealing crops and food from the community, so retaliation has become a problem in regard to conserving the baboon species. UWEC and Drive 4 Wildlife will be moving the baboons deeper into the Murchison Falls National Park so that the baboons stay safe from farmer retaliation. As such, the conflict between this community and the animals will be deflated.

In order to carry out such a task, UWEC need a vehicle that is capable for the safe transportation of wildlife. Thankfully, the Drive 4 Wildlife team ensured that the animal ambulance was fully equipped with the latest animal protection and rescue modifications. These include an animal crate to secure any animals rescued from the field or being released back into one of the national parks. A fridge to store any medicines or vaccines but also any blood samples taken from the field for research purposes. A winch on the front of the car to pull out any stuck animals such as elephant, giraffe and rhino. The light bars are full LED and the most powerful lights in Uganda, which will help on night rides for the anti-poaching team as this is the peak time for poaching to take place in the wild. Overall, Drive 4 Wildlife raised over £50,000 from their Just Giving pages and through the Paradise Wildlife Park website. All funds went towards the vehicle and to Uganda, with any extra monies going towards any support the UWEC team need in their anti-poaching and animal rescue efforts.

On behalf of Drive 4 Wildlife, Paradise Wildlife Park, Zoological Society of Hertfordshire and the Big Cat Sanctuary we are incredibly honoured to support such an inspiring wildlife charity. We hope that the animal ambulance will aid the increase of rescued animals in Uganda and impacts the conservation of such beautiful and iconic African wildlife species. Please follow the Drive 4 Wildlife facebook page to keep up to date with all the action! If you would like to donate to the cause, please see the Just Giving page. 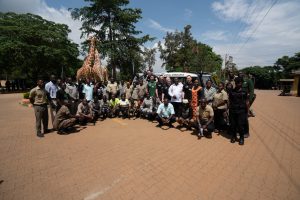