Annually on the 29th of November, Jaguars take centre stage to raise awareness about the increasing threats facing the Jaguar and the critical conservation efforts ensuring their survival. Jaguars are the Americas’ largest wild cat, acting as an umbrella species for biodiversity conservation as well as, an icon for sustainable development, whilst being a part of the ancient cultural heritage of Central and South America.

Here at Paradise Wildlife Park, on International Jaguar Day, we’re excited to share CGI’s of our new habitat ‘Jaguar Jungle’ that will be opening in 2022! This new habitat will house our beautiful resident Jaguars Kumal and Kedera who are currently holidaying at our sister charity The Big Cat Sanctuary whilst this is being built.

‘Jaguar Jungle’ will feature upstairs viewing areas and is a UK first for prospective visitors as they will be able to get an up-close view of our Jaguars and even a new pool with underwater viewing. We hope that our new habitat will raise awareness for the challenges wild jaguars face every day and highlight the pressing need to conserve the most iconic big cat of the Americas. 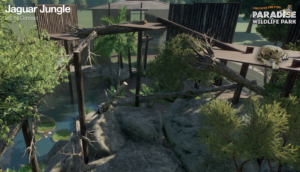 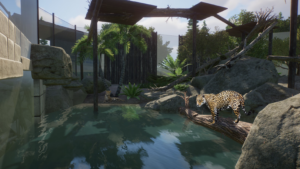 Jaguars have found themselves classed as Near Threatened on the IUCN Red List due to a suspected 20-25% decline over the past three generations (21 years) in area of occupancy, the extent of occurrence, and habitat quality, along with actual or potential levels of exploitation. In 2018, representatives from 14 range countries gathered in New York at the United Nations Headquarters for the Jaguar 2030 Forum. This Forum resulted in the creation of the Jaguar 2030 Statement which outlined a wide range of internationally collaborative jaguar conservation initiatives, including the proposal to create an International Jaguar Day. Many range countries observe Jaguar Day celebrations to help bring international awareness to the declining numbers of the species. Jaguar 2030 statement recognises the need to maintain natural habitats and biological corridors to ensure that Jaguars remain safe in their wild habitats and with the hope that the species will recover in population numbers.

Kumal and Kedera have done incredible work within the International Breeding Program, with the birth of their cub Kiera who has now just had her own cub with our beautiful Jaguar Neron at our sister site. All our Jaguars act as ambassadors for their wild counterparts and help raise awareness.

Jaguar Jungle is set to open in 2022 and we will be keeping our website and socials updated on the progress of this project. 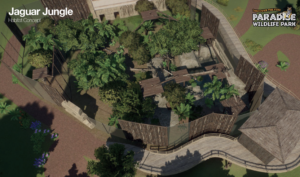