On the 23rd of October each year, snow leopards take centre stage to raise awareness for the species and to highlight the importance of snow leopard conservation. The first international snow leopard day occurred on the 23rd of October 2014 and has since been a day emphasising the importance of working towards stopping the poaching of these magnificent animals, as well as consolidating efforts to have local communities in the ranges where snow leopards reside to work in partnership to protect the wild habitats. This work is carried out by Snow Leopard Trust who work to protect snow leopards throughout their natural habitats in the mountain ranges of central Asia, working tirelessly in 12 countries that have known snow leopard populations. 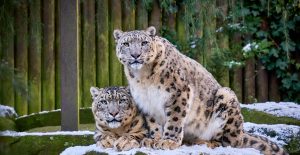 Jessie and Panja are our resident snow leopard here at Paradise Wildlife Park the Zoological Society of Hertfordshire. They were introduced to each other to become a new breeding pair in the European Endangered Species Breeding Program (EEP) for the snow leopards. EEP aims at conserving healthy populations of animals in captivity whilst safeguarding the genetic health of those animals in their care as a safety net if their wild counterpart were to be lost or are reduced to minimal numbers. When Jessie and Panja were first introduced neither took too kindly to each other and it took our dedicated zookeeping team over 5 months to both put them at ease and find ways for them both to reside together. Since then they have been inseparable and sparked the hearts of the world, with their nightly snuggles being seen through our CCTV cameras. 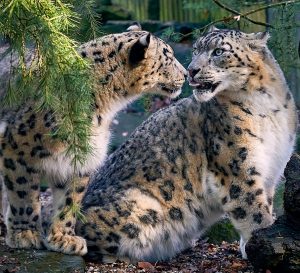 We hope in the future to have the pitter-patter of tiny paws but aside from this, Jessie and Panja play a vital role as ambassadors for their wild counterparts. With only an estimated 4000 -7000 snow leopards left in the wild today, it is vital that we protect the species from the many threats presented out in the wild. By adopting Jessie or coming to partake in our Big Cat Experience, you are helping to save this species in their natural habitat. Paradise Wildlife Park partners closely with the Snow Leopard Trust donating annually to their efforts of protecting snow leopards. With snow leopards mainly being found in the high Himalayan Mountain range which borders a wide range of countries, they are not the easiest animal to protect as they frequently cross borders bringing difficulties to conservationists trying to protect them. However, with efforts such as the Snow Leopard Trust, we hope this species can thrive once more in their natural habitat.