World-first known hatching changes what we know about Black Hornbills

We are proud to announce that our rare Black Hornbills have hatched a second pair of chicks, in what is thought of to be a world-first known documented event within the species.

Back in April, the breeding pair were announced to be the first pair in Europe to hatch and rear a healthy chick during a two-year period. The Hornbill pair have defied all previous known knowledge about the species, having successfully bred and hatched a pair of chicks for the second time in one year. Both chicks are currently healthy and growing alongside attentive mum Mulu inside the nest box. 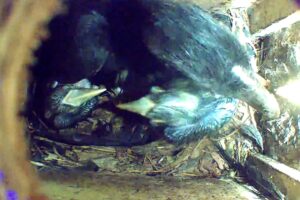 In the early hours on the 23rd June, Mulu the female black hornbill, once again sealed herself into the nest box, merely 12 days after exiting the nest box with her first chick Biru. It was on the 30th June keepers were alerted to eggs being laid on the CCTV cameras in the nest box and they continue to keep an eye on mum and babies.

Black Hornbill’s are a species of hornbill native to Asia and are found mainly in lowland forest habitats. According to the International Union for the Conservation of Nature (IUCN) Red List, the species is considered Vulnerable to the risk of extinction in the wild due to high levels of deforestation and hunting. These chicks mark a major discovery in the documentation of the species as well as in conservation breeding. Currently only 26 Black Hornbills are registered in the EEP (EAZA Ex-situ Programme) breeding program across all European Zoos.

Although Mulu and Darwin are new to parenting, both are doing an amazing job. Darwin continues to act as a great partner providing Mulu with plenty of food. Both mum and the new chicks still rely on Darwin heavily, whilst he cares for young Biru, their previous chick, outside the nest. 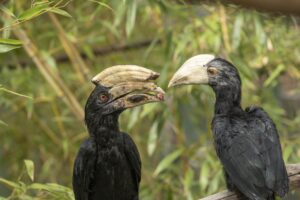 The bird team at Paradise have worked incredibly hard to create a favourable breeding environment. This includes nest box building, to using a misting system to replicate rainfall and a carefully managed diet. All of this has led to this incredible so far unknown breeding behaviour within the species, to be documented. If the chicks successfully make it past early stages towards fledging, we expect to see them break out of the nest box with mum Mulu around late September to early October.

These two chicks will add to the genetic diversity and population of this vital breeding program and create an insurance policy for Black Hornbills in the wild. With little research known about the species, this incredible event might be a newly documented occurrence in Black Hornbill behaviour. 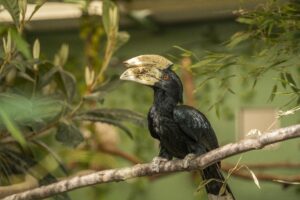