The Southern African Foundation for the Conservation of Coastal Birds – SANCCOB

Currently, as recognised by the International Union for Conservation of Nature (IUCN) there is a total of eighteen species of penguins with thirteen of these species either listed as threatened or endangered. Here at Paradise Wildlife Park, we currently have a colony of sixteen African penguins which are listed by the IUCN as endangered.

The Southern African Foundation for the Conservation of Coastal Birds (SANCCOB), is a registered non-profit organisation, whose primary objective is to reverse the decline of seabird populations through the rescue, rehabilitation and release of ill, injured, abandoned and oiled seabirds. With the estimates of only 18,000 breeding pairs left in the wild, SANCCOBs efforts play a vital part in protecting the species and ecosystems surrounding them. Their consistent efforts in the conservation of the African penguins and a number of other seabird species aids the overall protection of these animals for future generations. SANCCOB plays a vital part in the conservation efforts and every year Paradise Wildlife Park raises funds for SANCCOB to continue their necessary work. 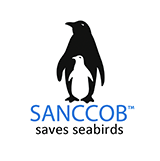 Here at Paradise Wildlife Park, our African penguins are part of a successful breeding program. As penguins are often lifetime monogamous partners, we have been extremely fortunate with our colony couples who have consistently bred each year. Often producing one or two offspring’s yearly. This would not be possible without the consistent efforts of our incredible zookeeping team who dedicate their time and efforts to continuously create safe and comfortable environments for our African penguins and all our animals at Paradise Wildlife Park. Our African penguins hold very unique and cheeky personalities with their favourite time of the day being feeding times, where they get to enjoy all sustainably sourced fish scraps mimicking their diets in the wild. One of our favourite couples here at the Park is Tosca and Karnu who have been in a monogamous relationship for many years and have produced a number of chicks. Here at Paradise, you can adopt one of our African penguins or you can even come and Feed a Penguin in a unique experience where you will gain a great insight into the species whilst being up close to the unique personalities of African penguins. With all funds going back into the work of the charity and the conservation. 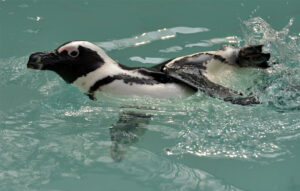 African penguins are one of the smallest penguin species averaging around 45cm and can be located on the Southern Coast of Africa up to the western coasts of Namibia. African penguins are sometimes referred to as: ‘jackass penguins’ due to their loud braying calls and have very distinctive features, such as their sharp-pointed beaks and black feet. Penguins as a species are flightless, who are primarily endemic to the Southern Hemisphere, however, a large number of species live in warmer climes and closer to human environments.  Though penguins don’t have wings, their flippers have allowed the species to evolve to become one of the most expert swimmers within some of the world’s coldest oceans. Some species of penguins are known for reaching up speeds of fifteen miles per hour. African penguins are no exception to this, as they swim against strong currents on the coasts of Southern African. However, through human causation, African penguin numbers are declining due to hazards frequently occurring, such as oil spillages affecting their body temperatures in colder waters and human rubbish they are mistaking for food within the ocean. It is feared that unless drastic action is taken Penguins will become extinct by 2050 as there has been a 60% decline of the species since 1950.

Without the vital conservation efforts from charities like SANCCOB the penguin species would be far worse. We hope that through their efforts and support of conservation charities penguins like many others will be around for generations to come. 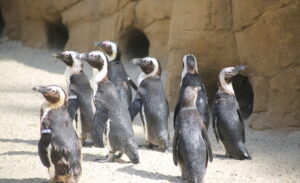